By Bankole ‘SijiAwosika
The synopsis of circumstantial events that literally compelled me to write this book I am the Nigerian Nation can be traced back to January 7, 1968. When I woke up that Sunday morning in New York, where I was working at the Nigerian Permanent Mission to the United Nations, I had wanted to buy my favourite New York Post when the screaming headline of ‘I am the Nation’ in the New York Times caught my attention and aroused my curiosity. The personal pronoun beginning the word “I” am was repeated over 20 times in the one-page article.

This is indicative of an autobiography. It was also written in the present tense which emphasised its timeless genre. It was all about the history of the United States of America; the founding fathers, the historical personalities; the swashbuckling heroes of great adventures; the war heroes of the Alamo, the Maine and the Pearl Harbor and the titanic struggle against colonialism and for Christian religion were predominantly highlighted. The genesis of the educational system that gave birth to thousands of universities including the universally renowned ones got prominent mention. The popularity of sports, the prowess and achievement of sporting personalities and clubs also featured in it. Popular playwrights and actors heralded the birth of Hollywood. Various places of interest that enhanced the growth of tourism and culture were featured.

With this article in mind, it dawned on me, years later that I have been destined and well equipped by my background and experience, particularly in the Nigerian foreign service to join the campaign for the resuscitation of history as a subject within the school curriculum.

I served in New York, Cairo, London, Edinburgh and Tokyo. Most importantly I was seconded to the International Secretariat of the festival of African arts and culture, popularly known as FESTAC ’77.

This gave me, as the Deputy Director of Protocol, the opportunity to be elaborately involved in the hosting of the global fiesta popularly referred to as FESTAC. Indeed, I travelled extensively throughout Nigeria arranging for accommodation, feeding, entertainment and tourism identifying places that may be of tourism interest. I attended many local festivals and entertainment venues. These included the thrilling Eyo festival in Lagos; the enormously popular and indigenous Ojude Oba in Ijebu-Ode, the historical Olojo in the “source” city of Ile-Ife, the hilarious Osun Osogbo in Osogbo; home-beckoning Azu-Ofala in Onitsha, the age-long Igue festival in Benin, the cultural parade of horse riders and gaily attire participants at the Durbar festival in Kaduna, the jubilant participants and throngs of spectators at the Ogun festival in Ondo, the highly cultural Igogo festival in Owo, the New Yam festival by the Nri people in Igbo land, the picturesque drums and songs of Regatta participants in the riverine areas, the fishing extravaganza at Argungu, and the Mmanwu festival featuring about 2500 masquerades in Awka, Anambra State. All these festivals were mentioned and described in the book.

I witnessed and participated in some epochal events which bear relevance to our nation, Nigeria. It is, therefore, incumbent on me to narrate in details my experience and observations in furtherance of my quest and campaign for the reawakening of interest in the study of history and its restoration to the curriculum in schools in Nigeria.

The importance of the study of history as a subject in schools can hardly be over-emphasised, History will broaden ones perspectives about life and society. It is a pity that nowadays, people, particularly parents are not aware, or couldn’t care less about whether their children and wards are taught the subject, History. People do not seem to understand the implication of ignoring history. It is like a winding river whose source has not been traced. The river runs the imminent risk of drying up.

History teaches morals. In the past, we used to be taught morals on the assembly grounds in the primary and secondary schools. History explains and defines the past, gives direction to the present by way of repairs, adjustments and damage control and gives the opportunity to plan and map out strategies for the future.

The Bible says “people perish for lack of knowledge”, where there is no sense of history, there will be no moral. Where such is lacking there will be anarchy. Perhaps this explains what is happening today in our country. The study of history should not be merely to appreciate the past but also to draw useful inspiration and lessons for the future. The mistakes and pitfalls of the past should be identified, corrected and eradicated to enable progress into a buoyant future.

Charity begins at home for instance some of the causes of Nigeria’s ethno-religious discords are located in our neo-colonial past. If today’s youths do not fully understand the history of their country and Africa, then one can imagine the type of leaders they would turn out to be in the future.

Certain historical details should not be consigned to the dustbin of the forgotten past. People, the youths in particular, should know the history of how civilisations and empires rose and fell in many parts of the country in centuries past. They should know about the causes, course and effects of Nigeria/Biafra Civil War from 1967-1970. What about the study of Ife, including its arts and architectures, of Benin civilisation, or Nok, Esie and so on? It is important to let the younger generation know the history of men and women whose activities and sacrifices challenged colonialism and laid the foundation for independence and self-governance. We should recall the religious crusading zeal of Ajayi Crowther and Othman Dan Fodio. We should teach the younger generation about the front-line activities of Herbert Macaulay; the colourful and vivacious Nnamdi Azikiwe; the leadership qualities of Ahmadu Bello; the innovative and pioneering zeal of Obafemi Awolowo, the spectacular image of Festus Okoti-Eboh, popularly known as Omimi Ejoh, the bombastic expression of “man of timber and caliber” K.O. Mbadiwe and “the King of boycotts”, Mbonu Ojike. By extension, what about the Aba women’s riot or the 1945 general strike which was the major political action that defined Nigeria as a Nation because it united workers from across the country who joined the fray to better their lot. They should go to Badagry to see the first story building in Nigeria, the first dug-out well and first Bible translated from English to local language.

In other spheres, youths should know about the history of sports and entertainment. They should draw inspiration from the 1949 “UK tourists” in soccer. They should know about the football wizardry and messmerising ball control of the master dribbler, thunder bolt Balogun, the inimitable Henshaw and his fierce shorts, the unerring and accurate passes of “Golden Toe” Titus Okere and Patrick Noquapor whom the legendary Kwame Nkrumah of Ghana daubed as “that dangerous number 11” because of his speed and ball control.

The entertainment industry is now on all lips. But history should recall the pristine and home-grown efforts and performances of the doyen of Nigeria theatre and cinema, Hubert Ogunde, Duro Ladipo and Kola Ogunmola. They were there before the advent of Nollywood.

At the risk of sounding imperious or alarmist, I aver that any country without a past would have no future. All the aforementioned facts are the essential ingredients of the country’s history that must be taught. They include the steps taken through Labour, solidarity and sacrifices. 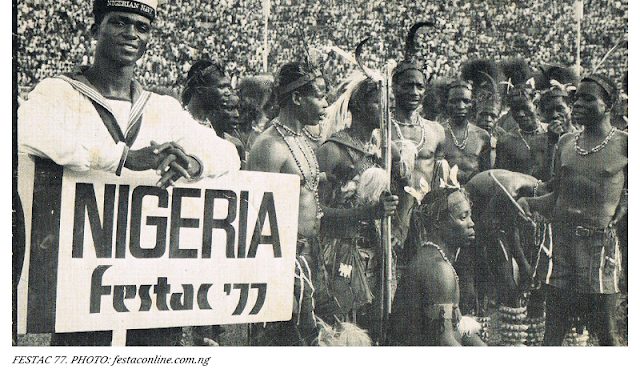