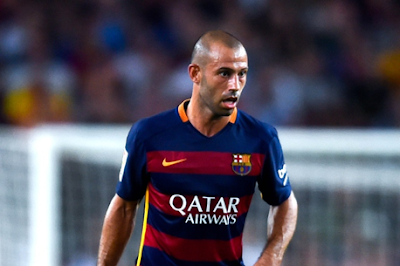 Javier Mascherano has been sentenced to a year in prison but is unlikely to ever serve time in jail, after a verdict was reached in his tax evasion case. The Argentine has been fined €815,000 and handed a year's sentence for two counts of fiscal crimes committed in 2011 and 2012.
Mascherano has previously admitted to the offences, repaid the money owed and paid a hefty fine as recompense.
After such compliance with the investigation, the court is expected to grant the wish of Mascherano and his lawyer, David Aineto, in suspending the custodial sentence in exchange for a further fine.
The Barcelona star said in a statement released on Thursday: "I'm a professional sportsman and I don't know a lot about legal and financial matters.
Javier Mascherano's statement in full:
Today I have reached an agreement with the Spanish tax authorities, with a firm verdict agreed by all parties. Thus, with a resolution now for the legal matters and with the relief of having sorted my tax situation, I would like to make a brief statement.
After agreeing my move to Barcelona I contracted a specialist tax agency with well-known professionals that enjoy a great reputation. According to my situation they recommended me certain structures, all within the law, telling me that they were normal, transparent and accepted procedures.
I was assessed by these professionals from 2010 to 2014 I decided to change agency because of the proceedings I was facing, and with evidence that the problems may not be 'potential' but in fact very real. My new agency recommended that I pay the tax authorities the money they were claiming, presenting also a corrective payment.
Now, finally, after a long wait this agreement has arrived which allows me to relax again and go about my daily life.
I'm a professional sportsman and I don't know a lot about legal and financial matters.
Therefore I must rely on the people that manage these technical, and for me, complicated, issues.
All my career I have been an honest and responsible person... I will take this experience that has accosted me as another experience which I will leave stronger and calmed by the fact that I am once again within the law.

http://www.lindaikejisblog.com/2016/01/javier-mascherano-sentenced-to-jail.html
Posted by Unknown at 11:15:00 am