Pres. Buhari submitted a letter to the senate, stating that adjustments were made to the 2016 budget. read the letter below: 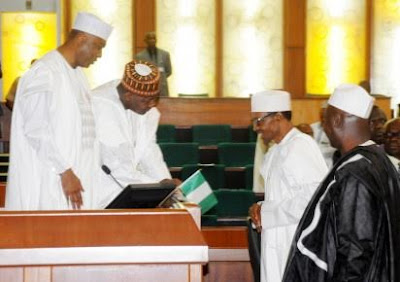 The Senate has received a letter from President Buhari, stating that some adjustments were made to the 2016 budget presented to it on December 22nd. The letter which was read before the house by Senate President Bukola Saraki this morning reads in part ‪
“It will be recalled that on Tuesday, 22 December, 2015, I presented my 2016 budget proposals to the joint sitting of the national assembly. I submitted a draft bill accompanied by a schedule of details.
At the time of submission, we indicated that because the details had just been produced, we would have had to check to ensure that there were no errors in the detailed breakdown contained in the schedule. That has since been completed and I understand that the corrections have been submitted. The national assembly would therefore have the details as submitted on the 22nd and a copy containing the corrections submitted last week. It appears that this has led to some confusion. In this regard, please find attached the corrected version. This is the version the national assembly should work with as my 2016 budget estimates. The draft bill remains the same and there are no changes in any of the figures.”Saraki says copies of the corrected version will be sent to the Senators today so that deliberations on it will commence from tomorrow Wednesday January 20th.
Posted by Unknown at 4:05:00 pm

i wonder at these people being proud of there discrepancies..

i think Nigerian politicians as well as the general populace, need to work on there integrity!